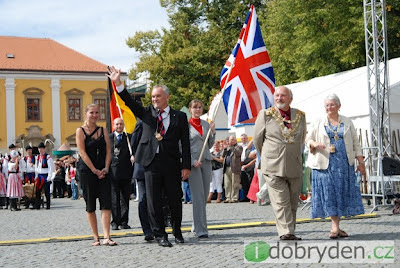 The Friendship society was formed in September 1991 and on June 18th 1992 Bridgwater became the first UK town to twin with a Czech town (Uherske Hradiste) after the velvet revolution of 1989.
The group runs trips to the Czech and Slovak republics as part of the wider programme of International link projects organised by Bridgwater International and hosts Czech,Slovak and other International guests in Bridgwater .
Secretary, Cllr Brian Smedley (Left), says "At the meeting we will review our programme for 2011 and preview our plans for 2012. We'll have a look at the state of the accounts and we'll elect Officers for 2012-13."
Current Chairman, Czech born Marek Delong, will be standing down due to his iminent departure to his home town and treasurer, Cllr Kathy Pearce, will also be looking for someone else to takeover from her. Anyone interested to attend is welcome.
Posted by BridgwaterInternationalBlog at 03:48