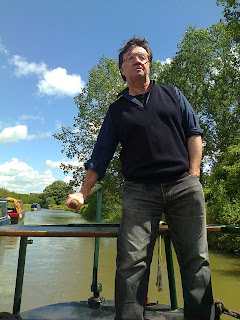 It's the 4th time we've taken people on a jolly canal trip . Same canal, mainly different people. For Katka and Zdenek from Prague this was their first time.

There was a bit of a worry with the English weather. Mainly whether it would stop raining.  And after the first day it did. Only to start again on the last day. Thus making an entire year to date of every trip to Bath being in the bloody rain.

Canal boats can be quite expensive but it you fill them to capacity with 8 people it doesn't work out so dear. We had 4.

Leaving late Saturday afternoon from Bath (in the pouring rain) we dredged our way as far as the Dundas Aquaduct - a genuinely lovely spot where the canal crosses a river and a railway line. Battening down the hatches we settled in for a night on the ocean waves, storms and tornadoes (one had just hit Somerset by chance causing £2.50 worth of damages when a photographer dropped his tub of raspberry ripple ice cream in order to find his camera to fail to film it).

But day 2 was lovely. Against all odds the Kennet & Avon canal decided to buck the trend of the rest of rainswept England and sparkled like a Bank Executives buttocks on the way to the dry cleaners.

Traveling at the speed of an asthmatic monkey in a balaclava we bobbed along  crashing into absolutely no-one, stopping at the Cross Guns canal side pub on yet another aquaduct -this time Avoncliffe- where we had lunch and watched the rising waters of the River Avon wash away the lower levels of the beer garden.

Not far around the bend was Bradford on Avon. Now there's a nice place. A lovely Marina  with real toilets and another canal-side pub with live music and quiz evenings where hardy Matelots could mix with locals telling tales of far off lands. Largely Trowbridge and Devizes.

Venturing into the unknown on day 3 - a bit like Shackleton or that bloke who got lost in the Caribbean as a tax dodge- we managed a lock and a few swing bridges. And headed east. Towards the Hilperton marshes. Where dwelt the fearsome legendary creatures of terrifying scariness. Mainly ducks. And the odd heron.

And then we met up with a nice family from Surrey who had got the balance about right sitting on the drivey bit (I would say 'bridge' but I think i basically mean the bit at the back where the tiller is) while their kids leapt about straining and stressing with the lock gates, whirling windlasses and generally popeing and toting. Now you can get along quite quickly on a canal if you twin up with another boat. Go through the locks together, overlap at swing bridges while the other crew opens and closes them. So we fair hammered it through North Wiltshire . But all well made plans come to a fork in the road...and ours was where our sailing partners nicked the last remaining mooring space for the night. Just beside a charming pub too.....with some bouncy music going down.

Never mind, we said (not meaning it) and ploughed onwards towards the dread engine shutting down time of 8pm...and could we find anywhere?? Well, no we couldn't...so we reached the foot of the mightily unpleasant Caen hill locks..24 of them..all upwards...and thought, well that's it for the night..hammering our metal stakes into the muddy, reedy bank and collapsing in an overworked heap. Sustained....as it happens...by a nice bottle of Korycany slivovice.

The next day we contemplated doing the locks.....and decided against it. So we walked up them instead and helped the other boats that were rufty tuftier than us. We convinced ourselves that the prize would only be Devizes anyway.

So we turned around and headed back west - this time finding a space at the Barge Inn....that nice music pub from the previous night...a place where the wifi trickles across the lock to the moorings and the beer garden sits amidst trees lining the canal.

Next day it was back to Bradford , taking on water and fuelling up with goods neccessary  for the last part of our arduous trek  to where man had seldom ventured..... Limpley Stoke.

But that was rubbish and it had started raining again so we continued to Bath. Mooring up just outside the Sydney gardens we found we could walk into the city from there and with no more lock gates or swing bridges to worry about we figured this would do us for the last 2 nights.

And Bath's a lovely city. The sun came out a bit and the Georgian finery welcomed the rugged seafarers into it's hostelries .

Then of course it bloody rained again. this time catching the entire population unawares...and you often wonder how Brits can be so thick.....shirt sleeved, tee shirted, sun tan lotioned, bewildered, all running for shelter and pretending to be interested in stationery , the people awaited the calm after the storm.

Which came. As it does.

And then it was home. Carrying out a waterways three point turn...that involves driving head first into a windy hole and accelerating forward so your arse overtakes your nose-we got the 72 foot monster back in it's cage. Well, I mean we parked it.

So canal boats.....a lovely way to spend a week....you can't legislate for the weather but you;re very unlikely to hit an iceberg. And that's true.
Posted by BridgwaterInternationalBlog at 11:06