Two Bridgwater Police officers – PC Dominic Bryant and PCSO Mike Shaw, visited the Czech Republic from 12-17 February 2015 on a programme organised by Bridgwater International with the co-operation of  the Uherske Hradiste town council , the UH Town and State Police departments and with the backing of Insp.Andrew Pritchard of Avon & Somerset Police.

Background;-  The project had been suggested at the Mayor Making event in Bridgwater 2014 when both Mayors of the twinned towns met and a proposal  for a Police Exchange was agreed by Insp Pritchard who had considerable experience of International Police work.
At subsequent meetings, Brian Smedley of Bridgwater International, acting on proposals from Insp Pritchard, developed a programme with the co-operation of UH Town Council but a lengthy delay occurred due to elections in UH in October 2014 which saw a change of Mayor. 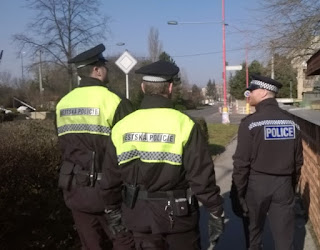 In December 2014 dates were agreed for February 2015 but it was made clear by Insp Pritchard that the trip would have to be self funded by the UK Police participants. UH council (which also runs the Town Police department) had proposed sending 4 Police officers each way and would fund this so long as the Bridgwater Police Authority reciprocated. Insp Pritchard made it clear there was not only no funding other than the contribution by the officers themselves but he also couldn’t spare 4 officers and limited it to 2.

It was agreed that whilst the UH council/Police would fund the incoming British Policemen (accommodation, food,programme, transport) the only funding therefore available for the Czech  incoming Police would be funds generated by charging the UK Police for the visit. This would be reserved in a kitty by Bridgwater International to cover an incoming visit (planned provisionally for November 2015)
Two sessions including a powerpoint presentation were provided by Bridgwater International with the UK Police officers before travel.

Finances ;- Both officers paid a total of £382 each (£764). Airfare was £321.96 leaving £442.04 to cover an incoming trip. No profit was made by Bridgwater International during this project. No subsidy was received or is expected from Bridgwater Town Council. Some additional help with budget was given by Mr Antonin Machala of Altech sro (and the founder of the Bridgwater-UH link). Elements of the Police programme was subsidised by Bridgwater International.
An additional request for hold luggage totalling £34 was submitted by the officers to carry extra equipment. This was paid for but has not yet been reimbursed. 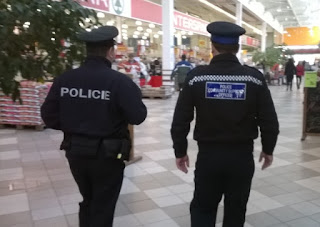 Programme;
The officers flew Bristol to Prague on  Thursday 12th Feb 2015 by Easyjet and were met at the airport by Brian Smedley and taken to join the tail end of the programme by visiting Bridgwater College students. This included overnight accommodation at Hotel Arlington (Prague), an evening meal and social with Czech music on the 12th plus a touristic programme with the students on the 13th including metro passes , a visit to the Resslova Crypt and a meal at the Parachutista restaurant. This was paid for by Bridgwater International.

On the evening of Friday 13th Feb UH sent a car and driver to collect the officers + Brian Smedley and all were driven to UH (3 hours). A meal on route was paid for by Bridgwater International.
Accommodation was provided for all 3 from 13-16 Feb at the Hotel Mlynska. Single rooms, breakfasts included. 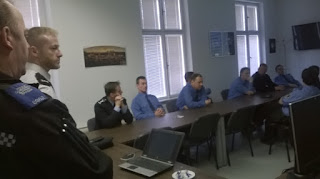 On Saturday 14 Feb the officers spent the morning in uniform patrolling with the Town Police (Mestska Policie), viewing CCTV . A lunch was provided by UH council at the NET restaurant
In the afternoon a private visit to a Goose farm was organised by Bridgwater International  for PC Bryant.

In the evening a wine tasting was arranged by the inspector of the Town Police Mr Paurik including food in the wine cellar of a friend. 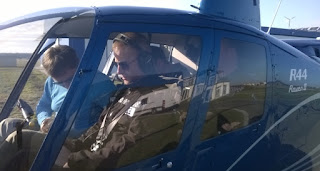 On Sunday 15th a  flight was arranged for officers by Mr Antonin Machala of Altech sro in his private plane. Mr Machala is the co-founder of the Bridgwater link, a local businessman and a sponsor of Bridgwater International. He further organised a spontaneous helicopter flight for the officers with a fellow businessman.

The State Police arrange the programme for the remainder of the day including accompanying State police officers on their duty in police cars-largely speeding and road traffic operations or patrolling areas of concern such as abandoned warehouses, supermarket complexes and railway sidings.
UH council paid for the officers to have a meal at the Orlovna restaurant. 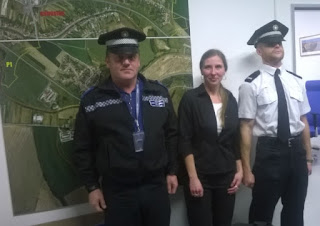 In the evening Bridgwater International paid for wine and snacks at  the U Juraku restarant where officers could meet other members of the UH-Bridgwater twinning group. Following this Mr Machala paid for a meal for the group at the Rotter restaurant. The officers presented mr Machala with a plaque from the Avon & Somerset constabulary which he accepted on behalf of the
Bridgwater-UH Friendship Link.

On Monday 16th February the officers were taken to witness  a demonstration of weapons used by  state and town police. This demonstration was held in Salas at the outdoor shooting range and was paid for by the UH council  with the co-operation of arms company Ceske Zbrojovska. Officers attended this event out of uniform and didn’t participate in handling the weaponry. Cllr Smedley  chose not to accompany the group to this event. Food was provided at the firing range. 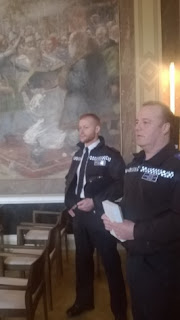 In the afternoon the Bridgwater officers presented a powerpoint to a large group of Czech police officers about British policing which was well delivered and favourably received. The officers presented the Czech chief of Police with a Custodian helmet and a PCSO hat for one of the officers.
They received in return 2 x town police hats.

A reception in UH town hall by the Mayor (Stanislav Blaha) and town councillors for the officers  included a debriefing session where all sides could speak of their experiences. The UK officers presented mr Blaha with a plaque from the Avon & Somerset Constabulary.

A meal was provide by UH council in the evening at U Sestka restaurant.

On Tuesday 17 February the officers continued to work with the Czech Police and took part in a visit to the Police HQ after which they were given a meal at Hotel Mlynska and then driven back to Prague airport for the flight home. 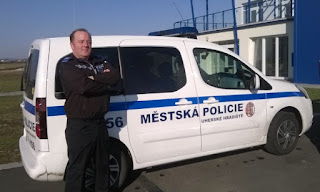 For much of the programme in UH the council provided Ms Adela Tobolova (a council officer) as translator. When she wasn’t available Bridgwater International provided staff.

Summary;- The visit was an extremely important event on the twinning calendar  and precisely because of this Bridgwater International wished to ensure the event went ahead despite the problems regarding funding and the slight confusion about who was paying and whether it was an official police trip or a private visit. Costs were kept down by subsidy from Bridgwater International and our sponsors .

Future;- An incoming visit by Czech Police is scheduled for November 2015 and this will need to be developed with maximum support from the UK Police to enable a satisfactory and appropriate reciprocal programme. Bridgwater International will seek to organise this within its limited budget but acknowledges the need for some considerable  support from the Police in terms of programme assistance and whatever logistical and subsistence extras can be achieved. 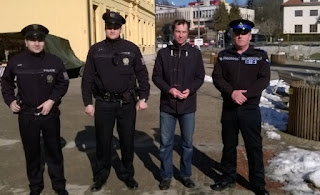 Brian Smedley 20.2.2015
Posted by BridgwaterInternationalBlog at 08:20