Czech, Italian and even Canadian Visit for Bridgwater Carnival

So for Carnival time this year we had a visit from the Uherske Hradiste Mayor and council plus a couple of Czech Police officers, a Czech teacher from the UH Gymnasium , a couple of itinerant Canadians and Luigi from Italy.

This is what we did

Thu 05 November 2015
Petr has some more job shadowing
Meanwhile the Czech dignatories arrive (Bristol airport 1815) and we take them to
MODEL FARM  at Perry Green,
For the evening we have a meal for them at the Green Olive

Friday 06 November
Petr has a bit more job shadowing
Czech Police group (x3) are collected from Model Farm  by Police car and taken to  Police HQ (Portishead) for a full days programme including 0845 Comms 1000 leave HQ  1030 Almondsbury RPU & Dog Unit, ride along, demonstrations & armoury visit  1300 lunch 1345 protestor removal 1500 Black rock range and demonstration 1600 transport to Model Farm arr 1645 (for 1700 departure)
The Czech Civic Group  has a visit to town centre and the Friday market and can seen the  carnival preparations and then a 1200 reception at Sedgemoor District Council by civic leaders including a special guest appearnce of Ian Liddell-Grainger MP who has suddenly found himself the chairman of the Parliamentary czech/Slovak committee.
1415-1515 visit to the new Swimming pool 1610
1530-1630 visit to Cllr Dyers agro-tourism business
1630 return to accommodation  1700 depart for evening
1715-1845 Evening meal with Mayor of Bridgwater Tudor Restaurant
1915 *Annual fireworks display on Fairfield
2000 Bar 27 (Lounge bar with live music)  to see 'Snappa' a local pop group who play a mixture of The Beatles, The Who, The Stones, Elvis, Johnny Cash, T. Rex, Buzzcocks, Hendrix, Undertones, U2, Blur, Oasis, Green Day, Kaiser Chiefs, 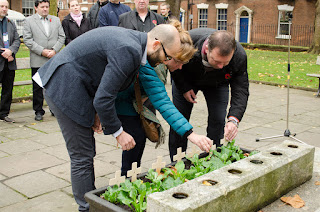 On the way to the airport the visiting Czechs, Italian and Canadians have a
short stop at  the Cenotaph in Kings Square for remembrance day.
Liam Cooper from Guelph Ontario reads the poem 'In Flanders Field'by John Mcrea