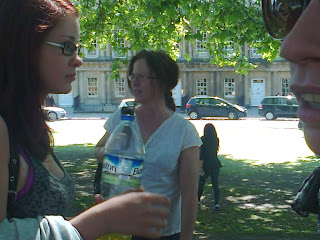 It only seems like 8 years since the Czech choir Labyrint were here last and in fact it was. In them days most of them slept on the farmyard floors of Jess & Malcolm Healey's Glendale Dairy farm in Wedmore. Suddenly it was 2013 and they were there again. Funny how nostalgia hits you.....

Labyrint are from Prague and are a choir. That much we've established. The leader, conductor, dirigent and choreographer is Lenka Charvatova. They came to Somerset twice before and mainly linked up with the Voice of the People choir who occasionally they also linked up with on their European tours - noticeably Krakow and, well, Prague.

This year they thought they'd re-live old times, sleep mainly on the floor of a dairy farm  and see how many 'gigs' they could fit in.

So 12 stayed on the farm, totally at the mercy of the kindness of the Healey family who filled them up with toast, eggs (or whatever cows produce), hams, bacons and cheeses etc. The rest stayed with various home hosts in  Bridgwater.

Day one saw them seeking the sun in Weston Super Mare. Little was there. Bit windy though, so better take a walk down Brean Down. That windswept outpost of Palmerstonian folly blown up by the tedium of it's garrison one drunken night in the 1890's.  But this group was fascinated by the tides. By the Severn and Parrett 'Bores'. So what better place to watch the tide come in than from a peninsula protruding directly outwards into the oncoming surge. It trickled past them.

Concert number 1:- Wedmore Methodist Church. Jess Healey and Gwen Fisher were the first to book the choir into their local church to relive past glories and the group didn't disappoint. Songs from the chorale to the gospel to the churchy to the vaguely religious plus some Czech folk songs about drinking and facing up to the missus. That should do it.

Day two and it was Wells, Glastonbury and Bridgwater. The latter because by now they were so fascinated by the prospect of an 8 metre high wave surging up the Parrett that they had to see it. 3.30 and it still hadn't arrived so I thought I'd tell them a few interesting stories about rivers and waves. Ah...too late, they missed it. The tide had turned. No wave had occurred. There really IS a wave. Honest.


Voice of the Wellington

So tonight they met up with their old friends Voice of the People. Now  based at the Friends Meeting House in Wellington. Led by the indomitable Yvette Staelens and containing a few old faces, the Voices laid on a bit of a spread for the Labyrintians and then had a 'sing it like it is' contest. But how exactly do you face down madrigals and  renaissance chorale harmonies? Of course- 'What shall we do with the drunken sailor on ilkley Moor bah t'at'. That'll learn 'em. Then the Czechs pulled out guitars, the Brits pulled out kazoos (sic)  and the county archivist pulled out a laptop with ancient folk song lyrics on it and it was just like being on the Mark Radcliffe show. Voice of the People are of to Hungary later this year - now there's a country where the paramilitary wing of the folk song and dance society wear uniforms.....

If it's Friday and the suns come out it must be Lyme Regis. 4 hours in the sun. See, Prague may be consistently and averagely hotter than here but they haven't got any bloody beaches to go to when it is!  Not sure what they did all afternoon but there's a very nice pasty shop down the main street which has wifi access. And warmed up Dorset apple cake. With clotted cream. Knowing they were all on diets I made a point of staying there in case any of them were tempted to go in. No one saw me. I mean, I didn't see any of them.

And that evening was the next big show. Martock All Saints church for a fund raising event with the Stanmore school kids and local choir Harmony 303, who will be visiting Prague later this year to visit Labyrint.  Well, H303 may have the wisdom and experience of age and cake making and Labyrint may know more notes than actually exist, but the toddlers from the school blew them both offstage with renditions of Chitty Chitty Bang Bang and We're All Going on a Summer Holiday, replete with action choreography reminding us fondly of that time that Cliff and his mates were all nearly shot by Yugoslav border guards. A big audience graced the church despite the Andy Murray semi final and Harmony 303 laid on a splendid afternoon tea including a special Labyrint cake with a life size replica model of the choirleader made of marzipan. And possibly cheese.

Next day was a visit to the Wedmore street Fair. Jam was sold. And bought. Brides were auctioned (I assume, I didn't go myself) and re-enactments of the Treaty of 878 re-enacted. 'sign there please' 'ok' 'thanks'.

And then an afternoon in Bath before it was off to the Frome festival. 'Which ways A&E?' said the bloodied man who greeted us in the Cork street car park. This didn't look good. Had organiser Martin Dimery forgotten to tell us it was a festival of drunken halberd novices? No luckily it was a one-off drunken twat. The festival was great. And the queue to the South African food tent was massive. As indeed was the audience at the St Johns Church concert by candlelight that evening. Labyrint were in fine form - only, for some reason in the town that gave us tribute Beatlemania, they forgot to include their swingle singers version of 'Michelle'. A big turn out and some funds to take home with them and actually Frome is quite a nice place. Possibly.

And then they were gone. A sunny day in Bristol and a short plane journey back to Prague but with melodies,harmonies and counterpoint sub harmonies it was as if the Renaissance was something that only happened to others.