10 Days in the Caledonian Sun 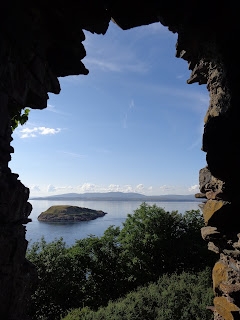 The heatwave that had swept England had come to an end and the birth of the Royal baby had coincided with a lightning strike on Manchester railway station. What better time to get away from it all to the sunny climes of tropical Scotland where summer had just begun and the people were happy chatting about the options for next years independence referendum. Seeking refuge in a minibus full of Czechs and not being Nigel Farage, I assumed I'd be safe.


Every year a bunch of Pražaks (people from Prague) led by the formidable yet minimal Vera Bobovska and mainly called Jan, investigate a different part of the British isles. This year it was to be Scotland. Alongside the Bohemian 8 a couple of Moravian divkas half their age made up the contingent.

Scotland was having a heatwave. A tropical heatwave. Temperatures were rising and it was hardly surprising that by the time we reached Edinburgh we were sweating like monkeys who had been locked in a room with a box set of Chuckle Brothers DVDs. It was hard to explain. Scotland wasn't normally like this.

But make the most of it! Let's go hit the fun capital of Europes next new nation state. We went to a bar. The Royal Oak on Infirmary street. Small and cosy with a good selection of whisky and an indifferently casual range of musicians sat around the room playing now and then and when they felt like it. The largely touristic crowd loved the 'Scottish' music they played. Only, it was Cajun. And incessantly so. "Is he singing in Gaelic?" asked a German "No, its French", "Why is he singing in French?" asked a Dutchman "I have no idea. He appears to like cajun music". "Ma grandmere est ma mere et mes oncles sont mes freres" he chansoned over a rickety accordion.


No fire was put out 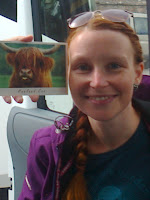 Youth Hostels are a great and cheap way to get around. Edinburgh central is, well, 'central' and so thats a good thing. A bad thing was the fire alarm going off at 4am. "It does that" said the chirpy chirpy cheap Aussie receptionist as dozens of sleepy foreigners stood in the middle of the road while no fire was put out because there wasn't one to put out.

So we headed north. Across the Forth and across the Tay , through the kingdom of Fife, up the east coast to the granite city of Aberdeen. 'Granite' because the grey buildings gleam silver in the sun and because it's about as interesting as a 3 hour documentary about granite. As the oil runs out and the granite doesn't Aberdeen will doubtless go on. Which is what we did as soon as we could the next day.

Heading up into the Highlands our first stop was the Braemar area town of Ballater - home of the historic Farquharson clan...'MY' clan...for what that's worth...tracing back through my Irish/Scots/Finlay ancestry...these are my people...I come from a long line of Farquhars..they'll welcome me back as great high clan chief and let me get off with their sisters and give me a pet badger. I'll try the cake shop. No hint of recognition. 'would you like a cake?' asked one . Things were looking up. I had a cake. 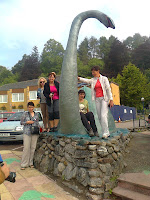 Driving over the Cairngorms we could see England on fire in the distance as the lightning storms bounced off the Scottish border. But by now we were in sunny Inverness. Time for more Heeland music. the Hoot-a-nanny pub..that sounds the place. Again, oddly, full of foreigners. Then a man with an accordion turned up, then another , then another and it was like Hitchcocks 'The Birds' suddenly there was a whole band of them sat round a table playing diddly aye dye dye music while the audience cheered along , happy that they had found the Scots saturnalian hoe-down of their dreams.

Next day it was down the Great Glen and Loch Ness. Where IS that bloody monster?? Not in the Drumnadrochit gift shop for sure...so why's everyone looking in there and buying Nessie tea towels "as used by Nessie herself don't you know!!". The day got hotter, yet no-one dared take the plunge into the tempting waters of the Loch. So we headed down the road to the isles and Eilean  Donan castle. Which of course isn't on Loch Ness..unless you watch the Ted Danson film of the same name where the producers thought it ought to be..and so it was.


Cuillin down a bit

Over on Skye it was more like Equatorial Guinea. But with more midges. Driving into the 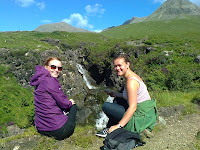 Cuillin Hills we stopped at the remote Glen Brittle. It was unavoidable, the Bohemians trekked to the mountain tops and the Moravians jumped into the crystal clear waterfall opposite the youth hostel. I got my guitar out. How is it that whenever you want to be inspired by the grandeur of the Scottish scenery all you can play is bloody 'Mull of Kintyre'. Well, that's a question for Paul McCartney. I picked up the hostels communal 4 string ('s left) guitar , open tuned it and suddenly I had discovered Gaellic modal reels - and so i went for it like a Jacobite jukebox. 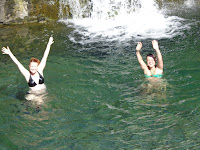 And the music continued through the night. Brno conservatory trained Lucie sang her way through the 4 Irish song books we'd brought with us while a short haired Dutch hiker girl tapped her feet randomly in one corner and suddenly a passing Fell-Walker from Stoke could contain himself no longer and joined in. It was like a scene from Lawrence of Arabia. But without any Arabs.

Also on Skye is the Talisker whisky distillery. So that was worth a visit. Very nice pub on the lochside adjacent. Very nice food. If you like panini and midges.

Also on Skye is the fish town of Portree. If you weren't on a diet and only eating salad you could do worse than pop down to the harbour and get some freshly caught haddock from a tasty battered window just there.

Also on Skye is the far north Hebridean ferry terminal of Uig, from where you could see the Outer Hebrides. And take a walk down the fairy glen. Although the 'fairies' were largely 'midges'. 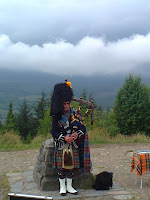 We stayed at Uig. A marvellous hilltop location with views across the bay from where you could see the CalMac ferries arrive and deposit their load of tourists. Who immediatly headed south because, to be frank, there's bugger all in Uig.


Up the Dusty Ben

Next day it was the long awaited Ben Nevis climb. 8 out of 10 made it to the top. Although the 2 Moravians hadn't made the summit, over the next few days they surely felt like they had as the Bohemians constantly relived their exciting experience. "We went up the mountain to the top, and then we came down" " Yes, was it like that for you Jan?" "Yes , pretty much."

Heading West we hit the Argyll coastal town of Oban. The Czechs jumped a ferry and continued to the isle of Mull and spent the day in 'Whats the story? Craignure ferry terminal. And then a one hour bus journey to Tobermory" . But they were back in Oban for tea and another little music bar. In this case 'Markie Dans'. Right where the main road hits the sea front. A boysterous yet happy saturday night crew. Jolly and fun loving. On the whole, pissed.

Glencoe is one of the nicest spots to have a wander in the Highlands. The Clachaig inn is the perfect base. You can walk the sites of the 1692 massacre and see the more recent cottage of Jimmy Saville now daubed with anti-paedophile graffitti. A lasting memorial to a man who had given so much of himself and who once posed alongside that very cottage with Prince Charles in kilts. 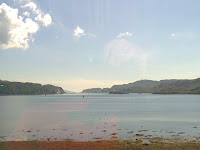 So a couple of days in Stirling. The Czechs were keen to know about the Independence debate. So we asked some locals. Billy and John were ex-army, Glasgow Rangers supporting lowlanders. Hmm, wonder what their views are?? "See, it's just these Teuchters from the North who want independence" said John "Aye, them and the plastic paddies" added Billy. I explained to the Czechs that there was a wider range of opinion in Scotland than maybe their media had suggested. So we went to find some music. Tonight the choice was Molly Malones -oddly an Irish bar. And tonight appeared to be an in your face drunken arsehole theme night. Don't open your English mouth  seemed to be the message. So that was depressing. But then the next night my faith was restored as we made a more sensible choice of pub. Nestling in the old streets below the castle, Nicky Tams is a cosy bothy of a bar. Tonight one of Scotlands legends 'Ted Christopher' was playing a low key event. Singing and playing at least a hundred songs and segues over about a 3 hour period none-stop, kilted, Nationalistic and Internationalistic in the same measure, self deprecating and gently ribbing the English, he was great. A highlight was his song 'Where's the River Mel?' a poke at Aussie historian Mel Gibson for his silver screen re-enactment of the battle of Stirling Bridge - minus the bridge. The crucial message for me goes back to James Connolly - 'you can't be a Nationalist without being an Internationalist" . 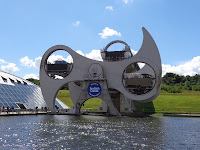 The next day I felt like taking someone up the Trossachs. Having got that out of my system I drove the Czechs to the highland lowland town of Callender. And then we went to Glasgow. The youth hostel is on a high peak full of victorian terraces in Kelvinside. Down the hill it's Sauchiehall street and 20 minutes left and you're in the city centre. Nightfell and city foxes brazenly roamed the terraces not even scarpering when i turned the minibus lights on them. Good job I didn't try to punch one!

But there's a few more interesting things to see in the lowland belt of Scotland. Linlithgow Palace -birthplace of Mary Queen of Scots, who married the famous Lord Darnley (from Leeds) and thereby united the Scots and English thrones. Rosslyn Chaple , where the rubbish Dan Brown book has made them billionaires and the fascinating Falkirk Wheel - a ridiculous goliath crane of a lock gate experiment for getting canal boats between varying heights by way of a fairground attraction.

And then it was over. An early morning (4am) drive to Edinburgh airport to get them back to where they once belonged and a mere 10 hour drive south for me and the Moravians. We must do more Scotland trips.....now's a pretty interesting time I'd say. As Dick Gaughan said "You don't have to be SNP to want Scottish independence" and as Nigel Farage learnt , the last thing they'll tolerate in Scotland are English Nationalists! And who could blame them.
Posted by BridgwaterInternationalBlog at 03:25