It had been several years in the making but finally it happened. Bridgwater's 5th town twinning was with the Italian town of Priverno. But the twinning trip was not without incident.....

It was only a couple of months before that Mayor Steve Austen had joined us on a preparatory trip and everything was set for a February twinning...but then Steve and Stella couldn't make it and nor could Deputy Mayor Leigh Redman.

So we dug into our resources and dragged out twice-former Mayor Commodore Bill Monteith, who brought along his Royal Marine marching sash and assumed the official role for the duration.

Tues 24 Feb
The group flew out of Bristol airport by the 1050 EASYJET to Rome Fiumicino
Arriving 16:20 they were met by Smedloid Minibus + Luigi in his car and transported the 60 minute drive to the Hotel Oasa di Kufra admitedly in the pouring and worsening rain.
1930 For the Evening meal at kufra the group was joined by Angelo Delogu the Mayor of Priverno

Wed 25 Feb
After a Morning in SABAUDIA the group headed off to Priverno, paid a visit to the Teodosio Rossi school where we continued to work on a possible exchange project before returning to Kufra for another evening meal overlooking the Med, this time joined by reggae musician Damiano Pellegrini and Susie Cioe who had been a key helper through the years of building up the twinning link. 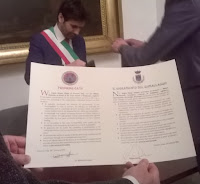 Thursday 26 Feb
Today was the day of the twinning and so the group changed hotels and moved into the Castello in Priverno.
After a guided tour of the town we had a healthy salad in a small inn on the main square followed by an unhealthy several beers in a bigger pub next door.
By the evening it was time to sign the twinning...sadly this was to be the last act in office of Mayor Delogu as the council that day had just 2 items on the agenda. 1. Do we want to twin with Bridgwater? (a unanimous yes) 2. Shall we suspend the council for a year following a vote of no-confidence in the Mayor..er, yes.
Luckily the two items weren't related and so we signed the documents in the main reception hall of the Priverno town hall, exchanged a few gifts and then went back to the pub.
Meanwhile Priverno's town council was suspended for the next 12 months pending new elections and a temporary 'administrator' from Rome brought in to run the place.

Friday 27 Feb
After a wild and windy night in the Castello - minus electricity and heat in some of the rooms - the group decided on a €5 train journey to a sunny Rome which was great. Although Cllr Pearce did have her passport stolen and subsequently had to stay in Italy for a few days longer than she had hoped to.

Saturday 28 Feb
After a fine breakfast at the Castello the group headed off to the World War 2 landing beaches of Anzio where they paid their respects to the fallen of the conflict before continuing to Rome and taking the16:50 flight back to Bristol - Arriving 18:40 . Job done.
Posted by BridgwaterInternationalBlog at 03:15